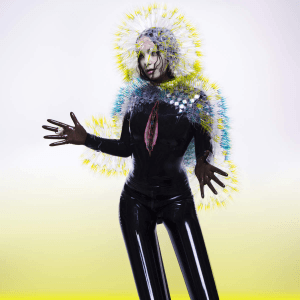 The old artistic adage of “beauty from pain” has become tired and hackneyed at this point, but occasionally, a work comes along that truly fits every facet of that definition. Vulnicura, Björk’s surprise ninth studio effort and her latest since 2011’s Biophilia, is one of those works. Written in the midst of Björk’s separation from artist Matthew Barney, Vulnicura is a turbulent, gorgeous masterpiece, filmic in scope and fraught with moments of pain, catharsis and healing. Some of Ms. Guðmundsdóttir’s most poignant songwriting and most awe-inspiring instrumentation can be found on this record, which stands tall among the best of an already masterful career.

Vulnicura begins with the sweeping, seven-song saga of Björk’s dissolving relationship, marked in the record booklet with the time each song was written relative to her divorce. In typical Björkian fashion, she transforms the painful tale into high art, rife with scientific metaphor and universe-speak. Album opener “Stonemilker” (“9 months before”) documents a slowly deteriorating love, suffering from lack of communication; it starts with somber string tones that gradually build into a grandiose soundscape with synthetic drum pulsing in the background as Björk coos, “We have emotional needs, oh needs, oh needs/I only wish to synchronize our feelings.”

As the record continues, we feel the relationship decay further and Björk’s desperation deepen; on the vocoder-heavy “Lionsong” (“5 months before”), she begins to ponder whether their love is even worth saving. The delicate “History of Touches” (“3 months before”) finds her voicing a soft incantation to Barney over icy choir tones, expressing a need for sexual intimacy and connection.

The 10-minute centerpiece “Black Lake” (“2 months after”) brings the chronicle to a head. Backed by a funereal string section, Björk sings as one defeated and abandoned: “Our love was my womb, but our bond has broken/My shield is gone, my protection is taken…My heart is an enormous lake black with potions.” Her initial hurt gradually expands into mourning and turns to rage; by the time we reach the turbulent drive of “Notget” (“11 months after”), the strings themselves are lashing out like wild beasts as she howls the almost sarcastic refrain, “Love will keep all of us safe from death.”

“Notget,” however, seems to mark the point where healing begins, and it continues with “Atom Dance,” which features the soulful guest vocals of Antony Hegarty. This dance is a fierce but harmonious one—despite the violence of Björk’s and Barney’s separation, they are now at peace with one another and can coexist, “dancing towards transformation” and letting “this ugly wound breathe.”

So ends the saga—but not the drama. Björk uses the album’s remaining space to discuss two other traumatic events in her life: a throat operation that left her literally speechless for three weeks (the arty meditation “Mouth Mantra”) and her mother’s coma-inducing 2011 heart attack  (“Quicksand”).

The drama of Björk’s story is augmented by virtuosic co-production from Venezuela native Arca, who previously worked with Kanye West on Yeezus and FKA twigs on LP1. Bobby Krlic (aka the Haxan Cloak) lends a hand on “Family” as well. The basic ingredients here are simple enough—strings, synthesized drumbeats, and voice—but all three producers use them to work marvels, creating a lush universe with a whole lot going on, but which still manages to sound stark and spare.

The true star of any Björk record, of course, is her remarkable voice— effortlessly transitioning between quavering wisp and impassioned cry, capable of childlike plaintiveness one moment and angsty theatricality the next. Her voice serves as the album’s uniting force, allowing her to sustain the mood of each individual track for considerable amounts of time (only two tracks clock in below the six-minute mark).

Thus, Iceland’s most famous resident triumphs once again, organizing the past four years of her life into a sprawling, artful reflection upon life itself—a reflection that reveals itself more and more with each listen. Björk’s inner anguish has, indeed, yielded a powerful work of art. (9.3/10)