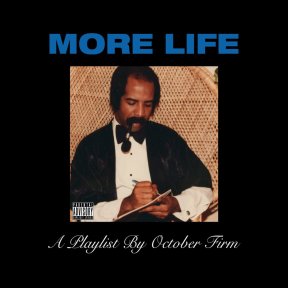 Scoff all you like, O ye rap purists, but you have to hand it to the man: Aubrey Drake “Drake” Graham has, in his own way, revolutionized hip-hop. With albums like Take Care and Nothing Was the Same, he orchestrated a marriage of rap and R&B sensibilities that hitherto had never been heard before. He rapped. He sang. He was profoundly, often uncomfortably, open about his private life. And everyone loved/loathed/secretly liked him for it. More Life, the latest tell-all tome from our young up-and-coming hero, is a sprawling, colorful sonic panoply that constitutes some of the most varied and enticing work he’s created in his career. It highlights the Toronto native’s strengths as a rapper while providing an exciting new platform from which to flex them.

Ultimately, More Life turns out to be a refreshing return to form following last year’s interesting but mostly lackluster Views. That album, paired with the prior year’s subpar Future team-up What a Time to Be Alive, made some fear that Drizzy, following an unprecedented winning streak, was finally beginning to lose his touch. Fortunately, Mr. Graham is nothing if not resourceful, and he changes things up a bit with this release, turning it into a celebration of black culture and the various musical forms it has begotten.

Don’t get me wrong – the Drake we’ve come to know and love/loathe/secretly like is still very much present here. He’s still reveling in his outlandish success and telling off all the haters nipping at his OVO Jordan-clad heels (“I mean, I keep the fuckin’ lights on in the building/Man, my record deal should be $500 million”). He’s still stressing out over work, doubting himself, wondering who he can trust (“I cannot tell who is my friend/I need distance between me and them”). He continues his never-ending search for that sweet spot between his hedonistic lifestyle and being a more sensitive, caring companion to the women in his life, with Rihanna, Jennifer Lopez, and Serena Williams being among the key culprits this time around (on one track, he even goes so far as to interpolate J.Lo’s “If You Had My Love”). At the same time, Drizzy has frequently proven that he’s at his best when he’s also at his most unpredictable, and More Life documents his evolution as a musician and as a person. If Views saw Drake fumbling for new ways to say what he wants to say, More Life confirms he hasn’t run out of juice just yet.

This reinvigoration is largely attributable to the project’s 31 (!) co-producers, who help instill it with its slapdash, globe-hopping motif (is it any wonder why it’s called a “playlist”?) Musical styles vary from track to track, keeping things interesting when the classic Drake formula threatens to slag. That’s in addition to the various high-profile guests (as well as a couple relative newcomers) Drake brings on board – and whom he wisely lets grab much of the spotlight. UK grime star Giggs makes two mind-obliterating features on the 808-heavy “No Long Talk” and “KMT,” brashly delivering such gems as: “I’m a black man, government earner/Could’ve just slapped man, but he wanted it further/Batman, da-na-na-da-na!” His fellow Britons Skepta and Sampha each get their own tracks, with the former unleashing the same ruthless, erudite flows found on his brilliant 2016 record Konnichiwa, and the latter using “4422” to croon about his relationship timidities as well as to shout out his Morden birthplace and his family’s roots in Freetown. South African DJ Black Coffee and British singer-songwriter Jorja Smith (another alleged love interest) endow “Get It Together” with a bouncy sex appeal, while lush, shimmering Afrobeat guitars and long synth tones bring a taste of Nigeria to the Wizkid-influenced “Madiba Riddim.” A few of Drake’s trap-slinging pals from the South – Quavo, Travis Scott, 2 Chainz and Young Thug – offer some competently jocular assists for “Portland,” “Ice Melts” and the somber, introspective “Sacrifices.” Even Yeezy and Weezy come along for the ride.

And then there’s the dancehall influence. Drake flirted with island rhythms on Views with the hit singles “One Dance” and “Too Good,” but here, he takes it to another level. He peppers many of the tracks with Caribbean soundscapes and Jamaican patois. He talks of being so “Blem” that he “might just say how I feel,” calling his lover’s ex a “wasteman” and warning her to “move from me with the passa.” The lush, tropical “Passionfruit” finds our man at his most vulnerable and tender, with a sunny backdrop flowing throughout as he softly expresses his anxieties about keeping a relationship together (“Listen/Harder buildin’ trust from a distance/I think we should rule out commitment for now, ‘cause we’re fallin’ apart”). Later, we hear tinny steel-drum hits punctuate his angry rebukes towards two-faced well-wishers on lead single “Fake Love.” It’s important to note that Drizzy never copies his influences directly or resorts to pastiche, but rather lovingly incorporates these styles into his own signature sound to create something new and uniquely stunning.

Drake himself often takes a noticeable backseat to his cohorts on a number of these tracks but is by no means phoning things in. When he does appear, he sounds completely rejuvenated, uncorking some of his most exhilarating, self-assured flows to date. Right out of the gate, he goes in on his manifold foes (in particular, one Meek Mill), offering them the fatal challenge of a “Free Smoke”: “Lot of n****s goin’ bad on me/Please, one at a time/I wanna move to Dubai/So I don’t never have to kick it with none of you guys/I didn’t listen to Hov on that old song/When he told me pay it no mind/I get more satisfaction out of goin’ at your head/And seein’ all of you die.” In this context, the title, a well-wishing catchphrase popularized by Vybz Kartel, becomes a bit of a double-sided mantra, echoed by Drizzy as much to himself as to the rest of the world.

Still, amid all the taunts, he isn’t afraid to do some genuine soul-searching on several tracks, admitting that much of his anger may stem from his own insecurities about himself. He bemoans the loss of support from friends and family on “Lose You” – “Winning is problematic/People like you more when you workin’ towards something, not when you have it…How they go from not wantin’ me at all/To wantin’ to see me lose it all?” Mom Sandi appears in voicemail form at the end of “Can’t Have Everything,” admonishing him to remember that, “when others go low, we go high.” By playlist’s end, his wrath seems to have cooled down a bit – or, at least, he’s a little more at peace with his situation. “Scary whenever I close my eyes at night,” he muses on album closer “Do Not Disturb.” “Wakin’ up to public statements about my private life/I can never sleep ’til morning on all my quiet nights/But you can rest assured that my mind is right.”

More Life is definitely a lot to take in and may be best digested in a few sittings, but there’s certainly a heck of a lot to love here. Drake melds his many influences into an intoxicating, irresistible aural smorgasbord; sometimes the seams are quite visible, but that only adds to the project’s charm. All in all, Drizzy seems to be learning more about the person he is, and in spite of his serious tone, he hasn’t sounded like he’s having this much fun with a project in quite some time. Here’s hoping that when he returns from his retreat to his “regular life” in 2018 to “give us the summary,” his inventive spirit will continue to thrive. More Life, indeed. (8.5/10)